I recently had the good fortune of interviewing (and being interviewed by) fellow Fae contributor L.S. Johnson, who wrote the darkly beautiful tale The Queen of Lakes.  If you’re looking for a tale of female empowerment, kelpie-like faerie creatures, historical fiction, or just something dark and tragic, don’t hesitate to dive into The Queen of Lakes– just watch out for what’s lurking in the depths!  Before you lose yourself in her magical prose, read on for a bit about the story’s creation and the author herself. 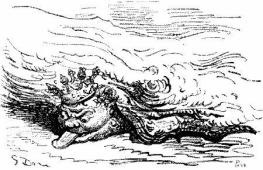 What was your inspiration for The Queen of Lakes?

In junior high there was a time when I had to walk home past a group of older boys who would harass me, every day. It got bad enough that I went out on my own and bought a butterfly knife, and I would carry the knife open for that last hundred yards or so before I could get into my lobby and behind a locked door. That is perhaps the story-seed—having no choice but to walk a very particular kind of gauntlet.

Too, there are other facets of my past in there—some of the stuff about gender roles, and poverty. I have a terrible memory, but certain moments have stayed very crisp and bright, and often when I’m thinking of stories I end up turning one of those moments over and over in my head, until they become something not-me.

But the story didn’t really get past the walk, and his voice—I knew his voice first—until I figured out just what he was.

You said that you heard his voice before you figured out who the each-uisge was.  Did you know about the each-uisge myth before writing this story, or did you discover the creature as you worked through your story’s idea?

I discovered the each-usige after I had written the story. I had some vague ideas about kelpies as I wrote it (the each-uisge is very similar) . . . but I felt like the trope had been done before, and the folktales encompassed a broad array of attributes. I also thought to simply leave him unnamed, or to invent something that would fit him specifically, but then I read about the each-uisge. It had a specificity that I wasn’t finding in the myriad kelpie tales I read.

It almost seemed as if Rose was warming up to the each-uisge towards the end of the story.  Did you ever consider having her befriend him as he wanted?  (But I do love your ending– after all she’s been through, she becomes a queen in and of herself, not a queen trailing around a king)

It honestly was never an option to have Rose befriend him, just as it wasn’t an option for her to reconcile with her people. Though I do have a great deal of sympathy for him, as I have for everyone in the story.

I struggled with the ending for some time, in that I desperately wanted Rose to find a way out that required neither violence nor compromising herself further. I was writing another story as well at the time called “Marigolds”, and both of their plots hinge on murder, and I’m a little disappointed in myself for that. When I have a character hemmed in on all sides my instinct is to find them a weapon and let them use it, but looking at both stories now I feel that I answered violence with violence, and in doing so I may have missed a more subtle, thoughtful resolution.

What that resolution could have been, I don’t know. But it feels important for me to keep interrogating that instinct in myself, and in other stories as well.

Is this your first faerie-creature story?  What other things do you write about (or what do you prefer to write about)?

I’ve written about Greek myths before, but my two sustained attempts at fairy stories (a novella and a novel) have both ended up in the Trunk of Abandoned Stories. Neither one really went anywhere, but they were good practice at longer forms.

Well this story certainly did, and with good reason!  I do hope you keep writing speculative fiction and can’t wait to read more from you someday!  Thanks for the interview, L.S.!

To find out more about L.S. Johnson, visit her blog and follow her on Twitter, and check out The Queen of Lakes and all the other wonderful stories in the newest World Weaver Press anthology, Fae.